Cons: repeated flip-flops with regard to exterminating the human race, mixed record as leader of the mutant nation Genosha, hangs out with a weird little Toad-man
Pros: First Jewish president, might be the only force capable of fixing America’s gun problem, dashing purple cape
Rating: 0.5 Trumps. Magneto has exhibited a murderous streak at times, but he’s also demonstrated a willingness to work across the aisle and cooperate with the X-men to take down greater threats such as the mutant pharaoh Apocalypse and Ted Cruz.
–
The Penguin 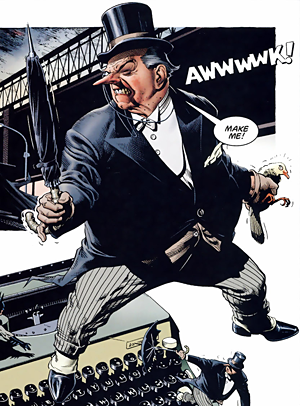 Cons: Extensive ties to organized crime and Tim Burton, raw fish breath is off-putting to other heads of state,
Pros: Executive experience in his role as mayor of Gotham, accomplished negotiator, classy dresser
Rating: 0.4 Trumps. As a craven one-percenter with an unhealthy fixation on his weird hands, The Penguin shares many of Trump’s insecurities. On the other hand, he’s much more likely to take aggressive action against climate change in order to preserve his supply of exotic birds.
Krang:

Cons: Rocky relations with Dimension X, aggressively interventionist approach to interdimensional relations, running mate is some kind of obese mute robot in a speedo
Pros: genius-level intellect, hypnosis powers could benefit international diplomacy, owns a badass technodrome
Rating: 0.7 Trumps. A Krang presidency would arguably be pretty good for America, but disastrous for the cosmos. As an evil brain in a robot body, Krang outpowers Trump in both intellect and physical prowess. He’s likely to transform the country into an interdimensional super power, but there’s going to be at least a couple alien genocides in the process.
Bane:

Cons: Venom addiction can lead to erratic behavior, gives undue access to lobbyists from the League of Shadows, tiny American flag pins cannot penetrate his rippling pectorals
Pros: classic Jesuit education, rags-to-riches background, capable of out-wrestling Vladimir Putin
Rating: 0.15 Trumps. As a drug-addicted authoritarian with a propensity for violence, Bane falls well within the political norm. As president he’d be one of the great showmen of American history, and while breaking the backs of one’s political rivals makes for a bad democracy, it makes for great television.
–
The Red Skull:

Cons: Sworn enemy of America, Literal Nazi, lipless visage makes his ‘b’s sound weird, alt-right followers responsible for some truly disgusting red Pepes
Pros: Uh… Nah.
Rating: 1.25 Trumps. While the Red Skull has demonstrated greater restraint with Weapons of Mass Destruction than Trump is likely to, he was also the direct protege of Adolf Hitler. This is the kind of guy who lives in a place called The Skull House.